Angel of the Abyss 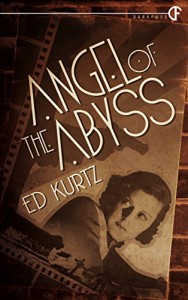 When a reel from a legendary lost film is discovered, Graham Woodard flies out to LA to help restore it. However, complications arise when the film goes missing and the owner gets herself murdered. But what does all that have to do with Woodard's ex-wife?

Angel of the Abyss is a short novel. "Modern Hollywood Noir" would be a handy label to slap on it. The timeline shifts from the past, when Gracie Baron was making The Angel of the Abyss, to the present, when Graham Woodard is hired to restore the legendary lost silent film.

First off, I have to admit that this book probably arrived at the wrong time for me. Consequently, it felt like I was reading it forever. There was nothing wrong with the book but it was definitely not a "drop everything" kind of read. It was more like a "I'll read this during the Cardinal game and maybe while I'm trying to fall asleep" kind of read.

Anyway, the shifting viewpoints keep the tension mounting. While I've never heard of Ed Kurtz prior to this, he knows how to use his noir conventions. He surprised me with quite a few of his twists and I should have seen the ending coming but he still got me. While the modern era plot thread was my favorite, I loved Ed's Hollywood noir dialogue during the Gracie chapters. There was a lot of action and both plot threads kept me interested when I made time to read.

Like I said earlier, I'm pretty sure this was a case of wrong book, wrong time for me. Since it's a DarkFuse release, I was expecting horror rather than noir. I still enjoyed it, though. Three out of five stars.