The Art of Growing a Beard 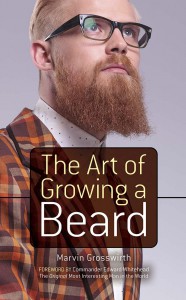 The Art of Growing a Beard is a book about the history, selection process, and maintenance of beards from throughout history.

This book was written in the 1970's and has been reissued. It is also a hilarious text on all aspects of bearded life and essential for the bearded or wannabe bearded gentleman.

Did you know we haven't had a bearded president in over a century? Or that it's perfectly acceptable to draw beards on photographs of oneself when selecting your beard? Or that the perfect accessories for a goatee are a string tie, mint julep, and a pillared mansion in some state of decrepitude?

Grosswirth also covers the impact growing a beard will have on your life, be it increased attention from the opposite sex or giving you an air of authority.

The Art of Growing a Beard does show it's age a bit. It was written in the 1970's and 70's slang and attitudes are prevalent, which makes it even more hilarious, in my opinion.