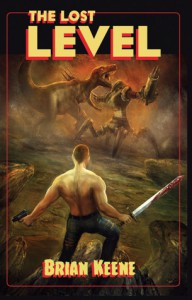 When occultist Aaron Pace begins experimenting with travel between dimensions, he finds himself trapped in The Lost Level, a realm purported to be inescapable. Will Pace buck the odds and find his way back home?

I've never read Brian Keene before and this is far from his normal fare, a planetary romance of sorts rather than his usual horror fare. While it wasn't my favorite book of this type, it was quite enjoyable.

As I mentioned above, The Lost Level is Brian Keene's homage to the works of Edgar Rice Burroughs, Land of the Lost, and similar works. While it obeys the conventions of the Sword and Planet/Planetary Romance genre, complete with buxom warrior women and many-legged creatures, Keene puts his own twists on it.

Rather than being a dynamo like John Carter, Aaron Pace is an occultist but still fairly capable. While traveling The Labyrinth, a dimension connecting many others via portals, Pace stumbles into the Lost Level, an inter-dimensional Sargasso where the flotsam of the multiverse collects. Soon after arriving, he meets Bloop, a creature resembling The Beast of the X-Men, and Kasheena, a nearly naked warrior woman. Together, the trio try to find Kasheena's settlement in the hopes of getting Pace back to earth.

Keene does a good job aping the style of the genre without sacrificing his own voice. His descriptions of the denizens of the Lost Level were vivid without being too flowery and he managed to convey a feeling of jeopardy throughout, unlike a lot of similar books.

The Lost Level setting itself was pretty cool. I love the idea of an inescapable garbage dimension populated by all matter of things, from cowboys to dinosaurs to the Nazi Bell. Since I was a Keene virgin prior to this book, some of the references were lost on me but I did notice references to the Rising and the Clickers sequels.

The Lost Level was a lot of fun but I wished it was about twice as long. 3.5 out of 5 stars. Keene's Labyrinth mythos has me intrigued and I'll be sampling more of his works in the future.