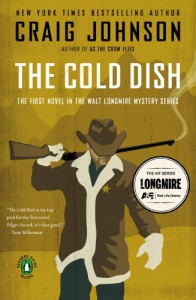 Two years ago, four boys were put on trial for raping a Cheyenne girl. When one of them winds up dead, sheriff Walt Longmire finds himself in the middle of murder investigation. Plenty of people had cause for wanting Cody Prichard dead but who had the guts to do the deed? And are his three compadres next on the hit list?

In my never-ending quest to sample what series crime fiction has to offer, I decided to give The Cold Dish a try. After all, A&E wouldn't make a crime series about a dud, would they?

The setting sets the Cold Dish apart from most crime fiction on the racks. A sleepy Wyoming town next to an Indian reservation is a far crime from most metropolitan cesspools. Walt Longmire isn't a super cop by any means. He's out of his depth and he knows it. His feelings about his daughter, his deceased wife, and Vonna, the woman he's recently taken a shine to, make him seem human and vulnerable.

The supporting cast is also interesting, although I thought some of the Native American portrayals might be leaning toward stereotypes. I liked the backstory and I loved that I had no idea who the murderer was until Walt did.

And now here's the stuff I wasn't crazy about. This very much felt like a first novel, particularly in the first half. Also, the author overused pronouns and sometimes it was hard to figure out which "he" or "she" he was talking about. The pace also dragged. For the first 60% of the book, I thought it was so average that I couldn't pick it out of a police lineup.

The last hundred pages was the saving grace of the book. The story got the kick in the ass it needed and I wound up digging it quite a bit by the end.

All things considered, I'm awarding this a 3.5. It's good and I want to read more about Longmire but there are other detectives in line ahead of him.