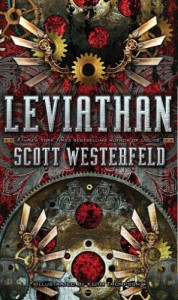 The Archduke of Austria-Hungary and his wife are assassinated and their son, Alek, flees into the night with trusted advisors. Deryn Sharp disguises herself as a boy to gain a post on a Darwinist airship. With a Great War brewing, how will their paths intersect?

I had Leviathan on my kindle for so long I'd largely forgotten when I purchased it. Sometimes, you just want to read about giant steam-powered robots in the dawn of World War I.

Leviathan is a steampunk adventure tale set in the opening months of World War I in an alternate world where war is brewing between the Darwinists and the Clankers. Darwinists use genetically engineered war machines while Clankers use big honking human piloted robots. Sounds pretty good, right?

In a Young Adult sort of way, it's a fun tale. Will her comrades find out Deryn is a woman? Will the Germans find where Alek is hiding? Will we see brutal robot on robot action?

The worldbuilding in Leviathan was my favorite part. Who doesn't love giant robots and huge living airships? Setting it during World War I was a nice change of pace that avoided some of the usual steampunk tropes. I also liked that Alek and Deryn didn't instantly fall in love and neither of them was a Chosen One type of character.

The writing didn't wow me, however. It was pretty average and felt a little repetitive at times. My main gripe, while we're on the subject, is that not a lot actually happened. I'm aware that it was the first book in a trilogy but it was pretty unsatisfying on its own. It set up a lot of stuff for future installments but had very little meat to it on its own.

Three out of five stars. I'm still undecided whether or not I want to spend money on the other two, however.