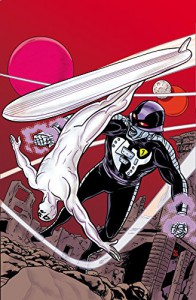 The Silver Surfer and Earth girl Dawn Greenwood soar the spaceways, encountering Planet Prime, space hillbillies, and the graveyard of worlds. What will the Surfer do when Dawn finds out about his past with Galactus, with a hungry Galactus on the prowl?

The Doctor Who-flavored adventures of The Silver Surfer and Dawn Greenwood continue. The Surfer takes Dawn out for the greatest ice cream in the universe, reminisces about instances when he had to save Dawn from peril, and accidentally leads Galactus to a planet full of the survivors of worlds he lead the planet devourer to during his centuries of servitude.

It's not as dire as it sounds, though. It's actually pretty funny at times and has some charming moments. Allred and Slott did a good job conveying the emotion when Dawn found out about the Surfer's past and his role in Galactus consuming trillions of innocent lives. The ending was pretty great and left me chomping at the bit for the next volume. I'm eager to see where Slott and Allred take the Surfer and Dawn from here.

Any gripes? Not a damn one unless a craving for more Silver Surfer the way Galactus craves planets is a gripe. Dan Slott and Michael Allred continue to make the Silver Surfer a character I'm dying to read more about. Four out of five stars.