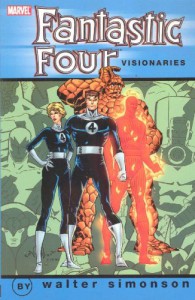 334 - 336: With the super hero registration act looming, the Fantastic Four head to Washington DC with numerous C-list super villains attacking them every step of the way.

Walter Simonson's run starts by being shackled by the Acts of Vengeance crossover but he makes the most of it. It's very timely with Civil War in the theaters that the super heroes were battling registration almost 30 years ago. The Fantastic Four battle The Constrictor, The Beetle, the Shocker, Ramrod, Plantman, Quill, Thunderball, The Super Adaptoid, Congress, and a lot of other scrubs and come out on top.

337-341: The Fantastic Four (Mr. Fantastic, the Invisible Woman, Human Torch, and Ms. Marvel), plus Ben Grimm, Thor, and Iron Man, use the radical dodecahedron to go into the time stream to investigate a time bubble created by a renegade celestial.

The Fantastic Four becomes the Walter Simonson show at this point as Simonson does the art chores as well as the writing. Simonson picks up some threads from an Avengers story he was prevented from writing, which shows since Thor and Iron Man have pretty big parts. The FF, Iron Man, and Thor, with guest stars Death's Head and Gladiator, battle the Council of Kangs, the Black Celestial, and Galactus, en route to collapsing the time bubble and saving the universe. All in a day's work, really.

Closing Thoughts: After Steve Englehart's run was hamstrung by editorial decisions, Simonson gets things back on track after the Acts of Vengeance speed bump. The time stream storyline was the kind of big story the Fantastic Four is made for, even if they were overshadowed by the guest stars on occasion. I forget at what point Ben becomes the Thing again but Ms. Marvel is filling his shoes well for now. I actually don't like Simonson's art here as much as I did on Thor.