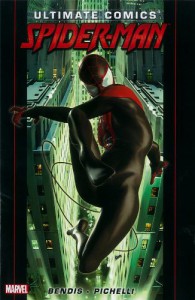 Months before Peter Parker's death, Miles Morales is bitten by a spider with a number 42 on its back. Suddenly, he has the abilities of a spider! But with great power comes great responsibility...

Legend has it that Miles Morales came to be when Donald Glover was campaigning to play the Amazing Spider-Man. So far, I'm digging it.

Miles Morales is a 13 year old mixed race teenager, suddenly selected to go to a charter school and get out of his neighborhood. While visiting his uncle, secretly The Prowler, he gets bitten by a spider that hitched a ride when his uncle plundered Norman Osborne's lab.

These first six issues tell Miles' origin, his first few outings as Spider-Man, and his encounters with Nick Fury and some other super heroes. All the pieces are in place and I'm more interested in Miles than I have been in Peter Parker in the main Marvel Universe in years. Gone is all the baggage but all the Spidey themes are still here.

I also like that his power set isn't an exact copy of Peter's. He's got some kind of sting and can turn invisible. The costume is also bad ass.

Instead of constantly hitting the reset button and rehashing the same stories over and over, Marvel should chances and make more comics like this. 4.5 out of 5 stars.
Tweet