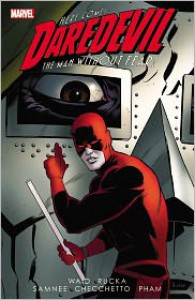 Avenging Spider-Man #6 - Everyone wants the Omega Drive! Daredevil, Spider-Man, The Punisher, and his partner take on a shit load of ninjas!

Things are kicking into high gear with the Omega Drive. Spidey, Daredevil, and the Punisher work fairly well together. I'm not sure Frank's going to keep his promise about no fatalities, though...

Punisher #10 - Things heat up as Frank, Cole, Spidey, and Daredevil take on AIM, HYDRA, and all the rest.

There was lots of carnage but the Punisher acted true to character in the end. This storyline might be going on a little long. I'll be glad to get back to solo Daredevil.

11 - Cole has the Omega Drive! Can Daredevil get it back and destroy it before hell comes crashing down on him?

DD manages to not die and leaves with the Omega Drive! I guess it's still in play.

12 - Matt finally goes on a date with Kirsten McDuffieand explains his past with Foggy until things catch up with him.

Things heat up with the Omega Drive again but Foggy and Matt at law school was one of the best character moments of the series.

13 - The four megacrime groups are in Time Square and Daredevil has the Omega Drive around his neck!

This didn't go like I thought it would but at least the Omega Drive is out of play for a while. I'm liking the relationship between Spider-Man and Daredevil the way Waid writes it.

14 - Daredevil finds himself teleported to Latveria!

Wow, and I thought being blind would be bad but losing your remaining senses one by one would be so much worse. Those Latverians are pretty miffed about the whole Omega Drive thing.

15 -Doctor Doom has Daredevil in his clutches. How will old Hornhead escape?

Shit, those were two brutal issues. How the hell are they going to get nanobots out of DD? Ant-Man? If I wasn't already bound to read the next volume, I'd have to now.

Closing Thoughts: This was not my favorite volume in the series so far but it was still pretty good. I'm glad the Omega Drive storyline was resolved and I'm digging Daredevil interacting with the rest of the Marvel Universe. Mark Waid's Daredevil is one entertaining read. 3.5 out of 5 stars.
Tweet