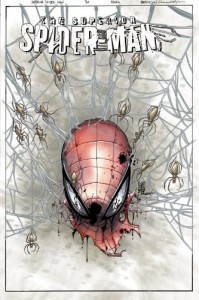 27 - The Goblin Nation is running roughshod all over New York and Otto realizes what is happening and that it's also too late! Spidey goes looking for the Green Goblin even as an assault is prepared on Spider-Island!

The end time is clearly here. All the pieces Slott put on the board up until this point are finally coming into play. Let's see if the destination was worth the journey!

28 - The Goblin Nation attacks Spider-Island and devastates it! Meanwhile, Peter is lost in Otto's memories.

The manure continues to hit the windmill. Otto is off his game, Mary Jane's got web shooters, and everyone is looking for Spidey! And the Goblins have Anna Maria!

29 - The Goblin is bent on destroying everything Otto Octavius holds dear! Meanwhile, JJJ decides to release his new army of Spider-Slayer robots!

Don Lamaze dies in a touching act of self sacrifice and Spider-Man 2099 shows himself again. The way things ended makes me think the chaos is just beginning.

Annual 2 - Ben Urich deals with his nephew being the Goblin Knight and the Wraith breaks into Parker Industries and runs into Carlie, aka Monster.

This was mostly filler, although the Ben Urich story had some touching moments.

Well, what I've been waiting for is coming soon. It's about time, too, since there isn't much of New York left to save.

31 - Spidey and the Green Goblin finally have it out!

Peter Parker is back and dukes it out with the Green Goblin and his minions. Afterwords, Peter begins the cleanup on what's left of his life after Otto was done mucking around with it. While I liked that Peter is back in control, it was kind of anti-climactic. For as much buildup as there was, the end was a little bit of a letdown. Still, it was an enjoyable read.

Closing Thoughts: When I started the Superior Spider-Man, I was not prepared for the roller coaster ahead of me. Doctor Octopus had good intentions at first and was frightfully effective until things started going off the rails.

While I enjoyed the journey, I thought Peter's return was a little too easy. Still, Dan Slott turned what easily could have been a bullshit sales booster into some of the most compelling Spider-Man stories in years, exploring what it means to be a hero. Four out of five stars.