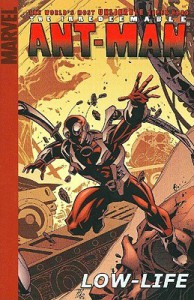 1 - The new Ant-Man saves a woman from a purse snatcher and asks her out for dinner. Then we are treated to a flashback of his origin. Part of it, anyway.

Okay, reading this on the heels of a Hawkeye trade was not a good idea. The pace is slow, the dialogue isn't great, and it's just not Hawkeye. It has potential, though. Too bad the origin story is still going on.

My suspension of disbelief is strained when a fuck-up like Eric O'Grady makes the cut for SHIELD in the first place.

2 - Things pick up when the SHIELD helicarrier is under attack. Meanwhile, in the present, O'Grady is using the Ant-Man suit to try to get laid.

Okay, this issue was a little better. O'Grady is finally in the suit and his douchebaggery continues.

3 - O'Grady makes a move on Chris' girlfriend before he's even in the ground. In the present day, he continues trying to get laid using the Ant-Man suit.

I can see how this is supposed to be funny, and it does have funny moments, but it's more uncomfortable than anything else.

4 - An agent is tasked to find the missing Ant-Man suit. Will he find Eric and bring him in?

We can only hope. I think this series would work much better if it was played for laughs instead of played seriously. For laughs, it would be like a teen sex comedy. Played seriously, it's got an ick factor and it really strains my suspension of disbelief that SHIELD agents would be so incompetent.

5 - Agent Carson closes in on O'Grady, both in the past and in the present.

Yeah, I'm glad this trade paperback is short. The sad thing is I know that O'Grady won't get his comeuppance at the end.

6 - Carson and O'Grady have it out in both time periods.

Okay, I didn't hate this issue. The fight between the two Ant-Men in the cafeteria was the highlight of the series so far.

Closing Thoughts: I'm really glad I got this from Marvel Unlimited rather than paying for it. O'Grady is a slimeball and not the kind of slimeball that is fun to read about. I will not be seeing how the series ends. 2 out of 5 stars.
Tweet