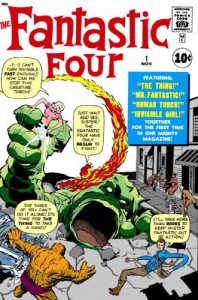 By now, most people know the story of the Fantastic Four. Scientist Reed Richards, his girlfriend Sue Storm, her brother Johnny, and Ben Grimm, a friend of Reed's from World War II, fly an experimental rocket into space, passing through a cosmic storm and gaining super powers in the process.

Issues 1-4: The team encounters the Mole Man and his monstrous subjects, has Skrulls impersonate them, battles a hypnotist called The Miracle Man, and face the wrath of Namor, the Sub-Mariner.

Things start off rough for the foursome. Lee and Kirby were laying the foundations of the Marvel Universe, whether they knew it at the time or not. Kirby's panels were already pretty spectacular, though that art wasn't as polished as it would become a couple issues later. Stan Lee's writing has a high cheese factor, however.

Issues 5-8: The team battles Doctor Doom, confronts the combined might of Namor and Doctor Doom, encounter Kurrgo from Planet X, and thwart the Puppet Master for the first time.

Both Lee and Kirby are finding their rhythm. Lee and Kirby are expanding the Marvel universe, although it's looking like they're going back to the Doom and Namor wells a little too early. After the issue with the Puppet Master, I have to wonder how much thought they actually put into Reed and Sue's powers at this point, and would they have went a different way if they knew the Fantastic Four was going to be successful. Things to ponder.

Yeah, Namor and Doom again. The Namor/Hollywood thing was hokey but Doom swapping bodies with Reed was good. I'm not a fan of Impossible Man but he was tolerable in his first appearance. The Hulk fight was actually a little bit of a letdown. Let's hope Thing and Hulk get more time to duke it out next time.

Issues 13-16: In these issues, the Fantastic Four battle the Red Ghost and his super apes, Namor, The Mad Thinker, and Doctor Doom in the Microverse.

I felt like the FF turned a corner with the Red Ghost story and things started clicking more. The Mad Thinker and the Doom story were both also really good for the time period. Ant-Man shows up and the Marvel Universe is really starting to feel like a universe. Oh, and the Watcher is introduced.

The stories continue the momentum set by the previous four. The menaces are more inventive and I have to think this is the point that Kirby started contributing more to the plot. It's crazy how many books Lee and Kirby were working on at this point in Marvel comics history.

Annual 1: Once again on the throne of Atlantis, Namor declares war on the surface world!

The origins of Namor and Atlantis are told, and Namor goes to war. This was a much larger scale story than the Fantastic Four's adventures up to this point. It would probably be a title-spanning crossover in today's terms. It's also a damn good tale.

There's also a pinup gallery and an expanded version of the story from Amazing Spider-Man #1 where he tried to join the Fantastic Four.
Issues 21-24: The Fantastic Four battle The Hate Monger, The Mole Man, Doctor Doom, and an omnipotent alien child.

The Fantastic Four continues rocketing forward. Sgt. Nick Fury makes his first appearance outside of World War II but before he starts wearing his trademark eye patch. Was it a sign of the times the way Sue Storm was portrayed or just a sign of Stan Lee's mediocre dialogue?

Issues 25-30: The Fantastic 4 take on the rampaging Hulk, clash with the Avengers while battling the Hulk, take on Namor, battle the union of The Mad Thinker, the Awesome Android, the Puppet Master and The X_Men, tangle with the Red Ghost at the Blue Area of the Moon, and encounter Diablo!

The Fantastic 4 ratchets up the pace yet again. The two-parter featuring The Hulk and The Avengers must have been the comic book equivalent of the summer blockbuster in its day. The battle between Namor and Mr. Fantastic was the only time I've ever thought Mr. Fantastic was a bad ass. The X-Men battle was decent but not in the same league as the Hulk or Reed vs. Namor. The Red Ghost encounter was a little better than the team's first encounter with him. The Diablo story was decent but how many mad scientists can the Fantastic Four encounter?

Closing Thoughts: Volume 1 of The Fantastic Four Omnibus laid the groundwork for much of the Marvel Universe. Things really started clicking at the halfway mark and I have to think Kirby had something to do with that. Marvel's First Family's adventures have just begun. I'm looking forward to reading the next omnibus. 4.5 out of 5 stars, adjusted for inflation and the evolution of comic books as a medium.