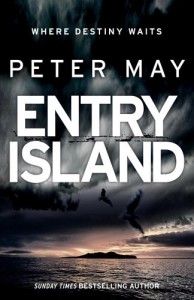 Detective Sime Mackenzie finds himself on a murder case on Entry Island, a tiny isle in the Gulf of St. Lawrence. The suspect, a newly-widowed woman named Kirsty, seems oddly familiar to Sime. What is their connection? And can Sime survive in the same unit as his ex-wife long enough to find out?

Entry Island was my first Peter May book and won't be the last. The book started a little slow for me at first but several things gripped me. I really liked Sime as a lead character. An insomniac cop whose life is falling apart? Sign me up! I also really liked the Entry Island setting. The thing that really grabbed me, however, was the book's structure. I loved the way things in Sime's ancestor's journal paralleled events in the main story.

The mystery wasn't all that mysterious but it wasn't the main focus anyway. Entry Island is very much a character driven book rather than a straight up mystery. The setting does a lot to set the tone, as does Sime's slowly disintegrating mental state.

It was nearly orgasmic when the connections starting coming together at the end. The last 30% was very hard to put down. Peter May has some serious writing chops. Even though I need another series to follow like I need a hole in my head, I'd read more stories about Sime Mackenzie.

So which Peter May book should I try next? Four out of five stars.
Tweet