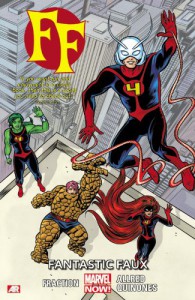 The new FF are struggling to hold down the fort. Bentley gets up to some mischief. The future Human Torch awakens and the future he's predicted draws nearer.

Ant-Man and company continue trying to fill the shoes of the Fantastic Four and go up against a leviathan, The Wizard, Blastaar, and The Inhumans but their biggest enemies seem to be themselves.

That might be stretching it a little but Matt Fraction and Mike Allred have created a throwback to the Fantastic Four of the 1960's, a bickering team that still feels like a family.

I dig Matt Fraction's writing. Maybe not as much as Dan Slott's on the Silver Surfer but he does a good job of writing something that works to Mike Allred's strengths and fits his art style. He also gets some mileage out of The Wizard and the Inhumans, something I don't think many writers do a good job of. I also like how he's planting seeds for the next volume while doing some good character development within the FF cast.

I really like what Matt Fraction is doing here and I'm keen to start the next volume. Four out of five stars.
Tweet