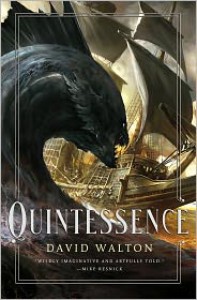 In a world where the Earth is flat and alchemy works, Alchemist Chistopher Sinclair and physician Stephen Parris leave their uncertain futures in England and flee to Horizon, a colony on the edge of the world. But even as they unravel the island's many wonders, can they truly escape the religious upheavals in England?

The Quintessance is part alternate history and part what I'm now calling alternate science. It takes place during the Age of Exploration, only in this world, the Earth is flat and the world is ruled by alchemical principles, and alchemist search for the Quintessence, the mysterious fifth element. It reminded me of [b:Celestial Matters|1233406|Celestial Matters|Richard Garfinkle|https://d202m5krfqbpi5.cloudfront.net/books/1316136910s/1233406.jpg|1222010], another alternate history/alternate science tale.

The two leads, Sinclair and Parris, contrast each other nicely. Parris is a rational-thinking family man and Sinclair is a driven alchemist seeking to beat death. Parris's relationship with his family does a lot to flesh out his character. The wonders of the quintessence got me interested in the story before the gang ever left England, especially Catherine and the manticore.

Once they drew closer to Horizon and began encountering all sorts of magical creatures, the story took off to me, only to bog down once they reached the colony. While the experiments with the quintessence were interesting, not a lot happened until the mysterious earthquake and the bad guys showed up.

The bad guys were a bit of a problem. Parris' cousin Vaughan was almost unbelievable he was such a selfish douche and Tavera, late of the Spanish Inquisition (NO ONE EXPECTS THE SPANISH INQUISITION!), was practically twirling his mustache in villainous delight, although I actually found him the more believable of the pair. The best villains are the ones that think their actions are justified and Tavera certainly had that going for him. If the story had gone another way, I could easily see Sinclair playing the villainous role.

That's about all I have to say. Quintessence was an enjoyable read but I'm not wetting myself in anticipation for the sequel. 3.5 out of 5.
Tweet