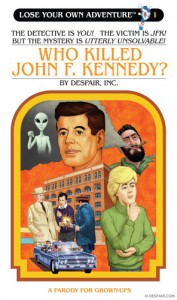 As the young son of Dallas's inept police chief, you take it upon yourself to solve JFK's murder. Can you?

No, you cannot, for this a parody of the Choose Your Own Adventure books you read as a kid, put out by the sick bastards at Despair.Com, makers of such hilarity as the Demotivational posters, like this one:

The book is written in a style that mimics the old CYOA books perfectly while still managing to mock it. I was gripped with nostalgia from the onset and it captivated me for a couple lunch breaks.

Attempt 1: Joined a group dedicated to revealing government conspiracies, wound up dead at Area 51 after stumbling upon the fake moon landing.
Attempt 2: Got into trouble after wetting the bed during a vivid dream and not hiding the evidence before going back to the police station.
Attempt 3: Wet the bed again, hid the evidence, but was ratted out by my nemesis/girlfriend Jenni Mudd.
Attempt 4: Made it to Area 51 again only to be mauled by a polar bear.
Attempt 5: Investigated the CIA connection to the assassination, only to be publicly branded a homosexual at a press conference.
Attempt 6: Investigated mob ties which led to David Ferrie, which led to me finding out crucial conspiratorial evidence, which led to me dying via a CIA suicide coin.
Attempt 7: Investigated Oswald, made a deal with J. Edgar Hoover, teamed up with Jenni Mudd, and wound up being a brainwashed assassin that killed RFK. This one was my favorite.
Attempt 8: Almost joined Altair (from #1), teamed up with Jenni Mudd, wound up getting lobotomized in Springfield, Missouri.

After 8 attempts, there were still a wealth of possibilities judging by me flipping through the rest of the book. I never met Dan Rather, for instance.

For a Choose Your Own Adventure type book and a parody at that, this thing seemed really well researched. There are even endnotes!

For what it is, I'm giving it a four. It should not be measured against other 4's on my shelf but was really entertaining while I was reading it.
Tweet