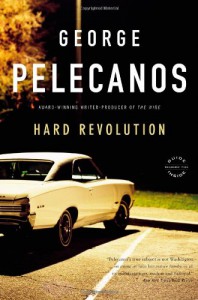 The Strange brothers grow up in Washington DC in the 1950's and 60's and take radically different paths. Derek becomes a cop while Dennis doesn't become much of anything. Can Dennis avoid ending up in jail for running with the wrong crowd? Can Derek keep his personal feelings out of his police work?

The fourth Derek Strange tale is a story from Derek's youth, showing what decisions he made that made him a bad ass private detective in the present day. Pelecanos uses historical events and the music of the time to paint a vivid picture of what it must have been like to be young and black in Washington DC in the 1950's and 60's.

Hard Revolution reminds me more of the DC Quartet than it does the other Derek Strange books. It feels more literary and, while there are elements of crime fiction, the book is more about the characters. Derek, who walks the straight and narrow for the most part, and Dennis, who is young and angry and living off of the Strange parents and a military pension. Strange, while thirty years younger, is still recognizable as the Derek Strange of the past three books. Even at a younger age, he's a ladies man, into Westerns, and into soul music. Some things never change.

All the usual things that thrill me about Pelecanos novels are here: period-appropriate pop culture references, cameos by other characters living in Pelecanos' DC, Big and Little Nick Stefanos in this case, and tensions simmering until they come to a explosive climax.

The assassination of Martin Luther King is the pin that gets pulled from the grenade in Hard Revolution and sets Washington DC into chaos. Strange and the other cops work themselves nearly to death trying to maintain order while the city burns. By the end, it's pretty apparent why Strange decides to quit being a cop sometime after this novel.

That's about all I have to say. Hard Revolution is yet another enjoyable novel from George Pelecanos. At this point, I expected nothing else.