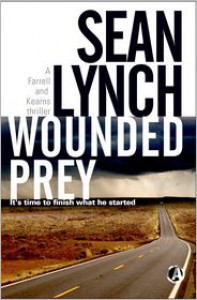 Rookie cop Kevin Kearns witnesses a child abduction and gets his ass handed to him by the perp, one Vernon Slocum. The girl winds up dead a short time later and Kearns finds himself the scapegoat. When a retired cop with a history of his own with Slocum, Bob Farrell, shows up offering him a chance at redemption, Kearns jumps at the chance. But will even two lawmen be enough to bring in a remorseless killing machine like Slocum?

First off, the official stuff: I got this ARC from Exhibit A in exchange for reviewing it. I'm a huge Angry Robot fan so when I heard they were launching a crime line, I sprung into action and nabbed print ARCs of their first two books.

Wounded Prey is the tale of a deranged psychopathic ex-marine and the two men bent on stopping his killing spree... permanently!

Sean Lynch's debut effort is quite something. This is one brutal book. The good guys don't walk out smelling like roses and the bad guy winds up smelling like something else altogether. Damn near every member of the cast goes through the meat grinder, some multiple times.

The two protagonists, rookie cop Kevin Kearns, and retired cop Bob Farrell are at opposite ends of their respective careers and complement one another nicely. I thought Kearns was a little light on personality but Farrell won me over after only a couple pages. Farrell was part mentor, part bad influence, making for an enjoyable read whenever the two were on stage at the same time.

And the villain, oh, the villain. Vern Slocum was one scary bastard and the idea of someone like him freely wandering around instead of being locked up was pretty chilling. He was rotten to the core but, given his background, didn't have much of a chance to be otherwise. On my all time list of deranged killing machines, he has to be near the top. It's pretty easy to hate a guy that's tougher than the heroes, a better shot, and a child rapist/killer to boot.

The FBI are caught in the middle. Scanlon's an asshole but he's trying to do his job. I was kind of hoping he'd join Kearns and Farrell in putting down Slocum but it wasn't in the cards.

The writing was pretty good, especially when Lynch was writing Farrell. Can you tell Farrell was my favorite character? I'll be interested in further books about Farrell and Kearns.

I do have a minor gripe. If A Farrell and Kearns thriller wasn't displayed above the title, there would have been a lot more suspense. Since Wounded Prey is the first book in a series, I knew neither of the leads would be taking the dirt nap. Other than that, not a gripe to be had. Four stars!
Tweet