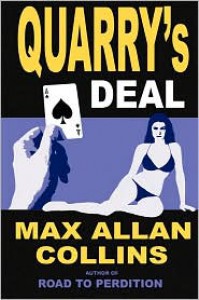 With the Broker's List in hand, Quarry follows a woman the Broker called Ivy from Florida to Iowa, intent on earning money by informing the target and protecting him. Only he didn't count on falling for her...

Quarry's Deal was a notch above the previous two Quarry reprints and nearly the same level as The Last Quarry. Collins' writerly chops are much more developed than in the previous two books. Not only that, I wasn't quite sure who Ivy's partner was until halfway through the book. I'd give this a 3.5 if I could.

"By why not a 4?" you ask. You see, Bertram, my problem is with the character of Quarry, as it is in almost all the Quarry books. For a professional killer, he makes a lot of stupid choices, usually regarding women. In fact, if there's a stupid decision to be made involving a woman, he'll make it. While I realize I should suspend disbelief, I can hardly imagine a hitman thinking "Well, I've followed this woman from Florida because she was on the Broker's List. Not only will I engage her in conversation and have sex with her, I'll also MOVE INTO HER APARTMENT." For that matter, Ivy's not much better, inviting a guy she just met to crash at her apartment while she's planning on offing a guy.

So, Quarry's Deal is really entertaining and better than the previous two Quarry reprints. Just don't look behind the curtain!
Tweet