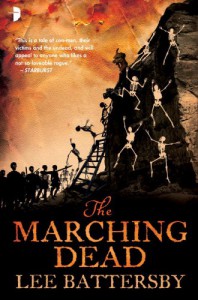 When Marius don Hellespont finds himself dead for a second time and his girlfriend missing, he goes out into the world seeking answers. It seems Scorbus, the king of the dead he helped crown, is bent on waging war against the living. Can Marius find Keth and stop the king he put into power?

At the end of the Corpse Rat King, I was hoping I'd read about Marius again. Lee Battersby must have heard my prayers, as he has served up another adventure of that loveable miscreant.

The Marching Dead picks up not long after The Corpse Rat King left off. Marius' idyllic retirement is shattered and he ventures out seeking answers with sometimes hilarious results. Battersby's writing is somewhere on the Terry Pratchett-Joe Abercrombie spectrum, funny without detracting from the seriousness of the story. Here's a quote that I loved about the dead mingling with the living:

The natural order had not simply been overturned. It had been bent over a barrel and sodomized.

See what I'm talking about? There were a lot of lines of this caliber peppered throughout the text. Battersby falls right between Terry Pratchett and Joe Abercrombine on the fantasy humor spectrum.

While Marius has changed a bit from his initial outing, his fundamental tricksy nature has remained unchanged. His relationships with Keth, Bryn, and the others kept the story going. I really liked his talk with Billinor, the boy king.

The ending was a little more predictable than the ending of the Corpse Rat King but it was really the only way it could go at that point.

Four stars! When is the third book coming out, Lee?