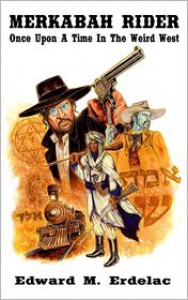 With a bullet lodged near his heart and the Hour of the Incursion just days away, the Rider and his small group of stalwart friends do everything in their power to stop Adon from rousing the Old Ones and ending existence. But whose side will Lucifer take in the conflict? And which of the Rider's friends is fated to betray him...?

Here we are, the ultimate volume in the best weird western series since the big daddy, The Dark Tower. Erdelac pulls out all the stops in this one. We are treated to such wonders as a steampunk cyborg created with Yithian technology, shoggoths, a scientist with an alien mind, an angel from another universe, and a golem made of pieces of dead gunfighters. Couple this with the Rider dying of a bullet wound, a sigil-covered train, and the manure hitting the windmill on every page and you have one book that is impossible to put down.

Faustus Montague, Kabede, Dick Belden, The Reverend Mr. Goodworks, and Yates made worthy allies for the Rider on his final journey. As with the previous volumes, Erdelac does a fantastic job tying together elements from Christianity, Judaism, and the Cthulhu mythos.

The ending of the saga was all I could hope for. All the big payoffs were there, from the true nature of the onager, the tzadikim and the Tzohar to the final conflict between The Rider and Adon. I'd say it was the best volume of the series.
Tweet