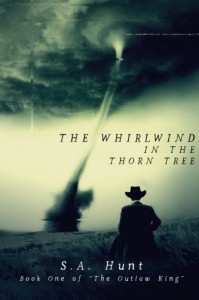 When Ross Brigham returns from a stint in the army, his life is a shambles. His wife has left him and his father, Hugo Award-winner Ed Brigham is dead with Ross tapped to finish his last novel in his western-fantasy series, the Fire and Fiddle. But what will Ross do when he finds out his father has been murdered and the world he has been writing about for years is real?

Two disclosures before we get down to business.
1. I got this book in exchange for a review. And it's pretty damn sweet.
2. I'm never in a hurry to read self-published books since they are usually not well written or edited to any visible degree. However, this one's name is a line from a Johnny Cash song.

Confession Time: Sometime during the gap between Wizard and Glass and Wolves of the Calla, I was so enamored with the Dark Tower that I took a number of stabs at writing my own Dark Tower-inspired fantasy western. I got about 30-40k in before I decided I was just rewriting the Dark Tower and put it on the shelf. I'm glad S.A. Hunt didn't shelf his Dark Tower homage.

Like it says on the back cover, The Whirlwind in the Thorn Tree is a love letter to the Dark Tower, 80's fantasy, and spaghetti westerns. Even still, I accepted this book with reluctance. I mean, first off, it's from Createspace. Why don't I just get out my red pen and start clenching my jaw right now? And it's an homage to the Dark Tower? Did Hunt just change a some things around and regurgitate the sacred texts like so many Tolkien imitators have done before him?

While the Whirlwind in the Thorn Tree may have been inspired by the Dark Tower in some degrees, like Stephen King being a character in the later books and the fact that there are Gunslingers running around, it stands on its own. It actually reminds me more of the second half of Lev Grossman's The Magicians, where Quentin finds out that the Narnia-analog Fillory is real.

Ross and friends Sawyer and Noreen find themselves on Destin, the world Ross's father had been writing up until his untimely death. A mysterious black figure stalks them as they struggle to get acclimated to their new world. Hunt makes the world-building fairly painless. I love that aspiring gunslingers have to eat some fungus as their final test. Those that survive have their brains reconfigured by the fungus to be awesome killing machines. Those that don't end up dead or irreparably insane. Good stuff.

My fears about the writing were unfounded. There were some editing hiccups but it was head and shoulders above most self-published books I've ever read. I loved references to the Dark Tower, the Simpsons, and lots of 80's fantasy and sf movies.

Any complaints? Just that there wasn't as much gunslinging action as I was hoping. It feels like the first volume of a series, which it is. When's the next one coming out, Hunt?

Read my interview with S.A. Hunt! He seems like a cool guy so feel free to give him the contents of your wallet.
Tweet