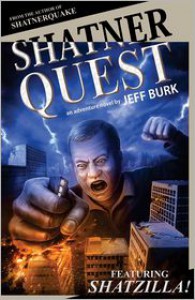 When another reality bleeds into our own at a comic book convention and armageddon is on the horizon, three geeks (and their cat Squishy) do the only sensible thing they can think of: Steal a dead man's DeLorean and go on a road trip to rescue William Shatner!

Shatnerquest is a bizarre road trip, a story of the impending apocalypse, unrequited love, and a smorgasbord of homages to geekdom: Star Trek, Road Warrior, and many other staples of geekery are represented. Seriously, where else can you read about a biker gang led by a wannabe Klingon, a cannibal Captain Kirk cult, and a Dalek gas station attendant? Not to mention Shatzilla's bloody rampage...

The final battle delivered the goods and made me with Shatnerquest was a movie or TV show.