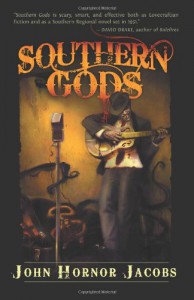 Bull Ingram is hired by Helios records head Scott Phelps to find two men: Earl Freeman, a missing employee, and Ramblin' John Hastur, a mysterious bluesman whose music can drive men mad. But what does Bull's job have to do with Sarah Williams, a woman who just fled her husband and fled back to Gethsemane, Arkansas with her daughter?

Sometimes, you read a first novel and pray the writer doesn't try for a second. This is not one of those novels. Southern Gods is a whole other animal. It's actually hard to describe. The closest comparison I could make would be to say it's like H.P. Lovecraft tried writing Gone with the Wind. It's mythos fiction but written in a more literary style with a Southern flair.

Bull Ingram is a brute of a man, a WWII vet who saw more than he wanted to overseas. He's a heavy for a small time mobster when he gets the call from Phelps. Sarah Williams is a woman tired of watching her husband drinking himself to death. I knew from the parallel nature of the story that they would eventually meet but the way they did wasn't something I would have guessed.

The Southern flavor is what makes the novel for me. Scott Phelps and Helios records seems to be a direct analogue of Scott Phillips and Sun Records, right down to the logo and the Memphis headquarters. JHJ makes good use of the 1951 Arkansas setting, from the peafowl to the segregation.

I have to admit, I wasn't completely sold on Southern Gods at first. It seemed to be moving too slowly for the first 40 or 50 pages. Then Ingram started getting closer to Ramblin' John Hastur and things kicked into high gear.

Much like Edward M. Erdelac's Merkabah Rider series, JHJ tries to fit H.P. Lovecraft's mythos into the same cosmology as the Judeo-Christian God, as well as many other pagan gods. I'd say he does a great job.

This is the point of the review where I justify not giving Southern Gods a five. Aside from the slow start I mentioned, it felt like the book had an identity crisis at times. While it was all tied together nicely at the end, I sometimes felt like JHJ wasn't sure what kind of story he wanted to tell. Is it Southern Gothic? Is it Mythos fiction? The end result was an inside the park home run for me but didn't quite manage to clear the fences.

The fact that he is able to tell an effective story about Hastur in 1951 Arkansas leads me to believe that JHJ is the real deal. I'll be ready when his next book hits the stands.