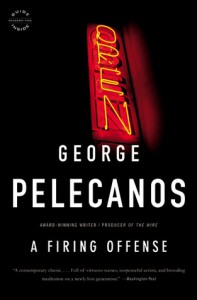 When an old man that knew his grandfather asks Nick Stefanos to find his missing grandson, Nick agrees out of a feeling of kinship for the boy. But what does an ad man in an electronics store know about detective work?

Here we are, George Pelecanos first novel. The more Pelecanos I read, the higher he is elevated in my esteem. A Firing Offense is no exception.

A Firing Offense starts off with a standard hard boiled plot: someone is missing. In this case, it's Jimmy Broda, a young man that reminds Nick way too much of himself at that age. Nick embarks on an investigation that is equal parts The Long Goodbye and the Last Good Kiss, an investigation that mostly consists of driving around, talking to people, and drinking a small lake of alcohol. For most of the story, Nick was in the dark as much as I was.

What sets Pelecanos apart from a lot of his contemporaries is his sense of time and place. Washington DC is as much a character in the book as Nick Stefanos and the pop culture references, mostly the music, paint a good picture of the time the story was occurring.

The music references lead me to believe George Pelecanos might have run into each other if I'd been going to shows in DC bars in the 90's. He mentions Night Boat to Cairo by Madness, a song I've listened to myself at the tail end of a long night out, and The Raybeats, a obscure Link Wray inspired band featuring Danny Amis, who is now one of the guitar players for Los Straitjackets.

It's an easy four star read. Washington DC is as much a character in Pelecanos' books as New York is in Lawrence Block's.
Tweet