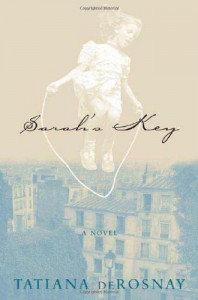 Reporter Julia Jarmond is investigating the events of 1942, when French authorities rounded up the Jews of the cities and put them in concentration camps, an investigation that uncovers links to her husband's family. But how will her tale intersect with that of the title character, a 10 year old girl separated from her family during the 1942 roundup?

First off, this is not something I would pick for myself. However, in the aftermath of a dinner featuring the best biscuits and gravy I've ever had, my girlfriend mentioned it being really good and subsequently brought it home from the library. In order to keep the biscuits and gravy train rolling smoothly, here we are.

Sarah's Key features two parallel plotlines for a good portion of the book, that of Sarah Starzynski and that of Julia Jarmond, the reporter who stumbles upon her story. The portion of the tale set in the past was my favorite by far but the present day tale had it's moments. I wasn't overly attached to Julia or her husband Bertrand, though. Especially Bertrand. He in no way conveyed the charm that was repeatedly attributed to him. Without spoiling anything, I longed for something bad to happen to him.

I was pretty sure I knew how the two plotlines would intersect and wound up being right in some ways. I loved how Julia's obsession chewed up the other aspects of her life and spat them every which way. The ending was pretty satisfying, if a little predictable. I'd give it a three and a half if such a thing was possible.