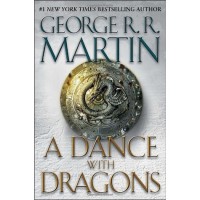 Stannis Baratheon marches on Winterfell from the Wall. Daenerys's empire is threatened from within. Tyrion finds himself enslaved. Cercei finds herself in chains. The Crow's Eye desires Daenerys for his own but so do several other would-be suitors. And Jon Snow faces dissent from his brothers of the Watch...

In the latest installment of Incest and Intrigue, more of the pieces are placed on the board. Daenerys can't trust anyone. Jon Snow can't trust anyone. Iron Lords cannot trust their own brothers. Sellswords in general cannot be trusted. In short, no one can trust anyone while the Game of Thrones is being played.

This one had its share of memorable moments, both good and ill. I really like how Arya's story is developing but I don't see how it's going to tie back into things. The revelation of Young Griff's true identity was a game changer and its repercussions will be felt in the next couple books. I liked that Brienne is still alive and that Jaime Lannister chose to follow her instead of rushing to Cercei's defense. Jon Snow getting knifed on the Wall by his sworn brothers didn't sit well with me. I'm really hoping he's still alive come next book, whenever that may be.

It looks like Theon is headed for redemption but I'd rather see him dead or taking the black. Bran is progressing nicely. Whatever happened to Ricken and that bastard of Robert's that isn't Gendry? And who is Cercei's new champion Robert Strong, the Mountain, perhaps? Barristan rose a couple notches in my estimation. I'm hoping he continues to draw breath in subsequent books.

I honestly don't think Martin will be able to wrap things up in two more books, not with all the balls he has in the air. Plus, it would be all too easy for him to throw more players into the mix to keep the saga going indefinitely.
Still, with A Song of Ice and Fire, George R.R. Martin has made an Oathbreaker out of me. I once swore I'd never get caught up in a neverending fantasy series. In fact, I believe I said I'd rather eat my own testicles. However, I'm pretty caught up in this one. Now if you'll excuse me, I'm off to join the tent city on George R.R. Martin's front lawn, to wail and gnash my teeth every night until the next book is ready.
Tweet