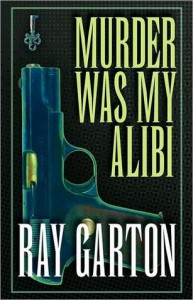 Detective Myron Foote is hired by Cynthia Thacketer to pose as her uncle so she can find out if the mob man she's seeing knows she saw him kill a man. Complicating things are Foote's feelings of responsibility toward a prostitute who knew his deceased sister and his own feelings toward Cynthia. Oh, and all the money Cynthia is planning on stealing...

With a title like Murder Was My Alibi, how could this book not be great? Easily, it turns out.

Maybe my expectations were too high going in but the plot turned me off right away. A PI impersonating a beautiful woman's uncle so she can figure out if the mobster she's seeing knows she saw him kill a man. Does that sound convoluted to everyone else? I didn't really buy the way Cynthia and Foote fell in love. It felt like she was setting him up for something more than anything else. The Bernice plotline felt tacked on. The ending felt way out of character for what kind of man the rest of the book established Foote as.

That's all about all I have to say. I didn't hate it but I didn't particularly enjoy it either.
Tweet