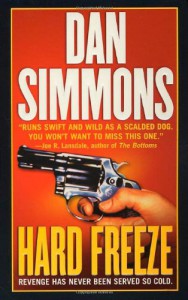 Somebody has put a contract out on Joe Kurtz and Kurtz wants to know who and why. Meanwhile, a dying concert violinist wants Kurtz to find the man who killed his daughter twenty years earlier. But the killer died in a house fire decades ago. Or did he...

Simmons' second love letter to Richard Stark's Parker and similar crime fiction characters is almost as awesome as the first. From the opening with the Attica Three Stooges trying to whack Kurtz while he gets a bite to eat to the shit storm of violence at the end, Simmons delivers the goods.

Kurtz grew as a character in Hard Freeze. He inched closer to having a relationship with his daughter Rachel, whom he's never spoke to. He took Frears' case despite not being initially interested. I just hope the missed appointment with his parole officer doesn't bite him in the ass in the next book. Millworth was a more than adequate villain. While I'm officially tired of serial killers, Millworth was well done.

That's about all I have to say except to watch for a Spenser reference early on. It seems Arlene doesn't like Susan Silverman either. Hard Freeze is nearly as good as Hardcase. Nab it if you get the chance.