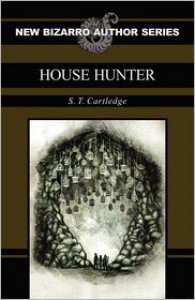 In a world of sentient houses, Imogen is a house hunter. When dark forces seek the mythical Jabberhouse for their own nefarious purposes, Imogen must sacrifice everything she holds dear to stop them...

Another year, another round of the New Bizarro Author Series. As with past NBAS books, you never know what you're going to get.

House Hunter is a bizarro adventure tale, more akin to fantasy quest stories than most bizarro tales. It reminded me more of the 1980's classic movie The Labyrinth more than anything else, with hints of China Mieville's Un Lun Dun.

The world STC creates is delightfully strange. Sentient houses walking around and battling one another isn't something you come across every day, especially houses with nipples on their walls. The pygmy houses were by far my favorite of the creatures he created. The story follows a fairly standard quest structure, complete with Imogen suffering some crippling setbacks before rising to the occasion and saving the day.

I do have a few gripes, though. Imogen wasn't overly interesting as a lead character. Also, there were a few occasions where I felt like I was missing something or turned over two pages at once. Other than that, the only other gripe I have is that "cannon" was misspelled "canon" on quite a few occasions. Other than that, it was a fun weird romp and a good way to spend a lunch hour.