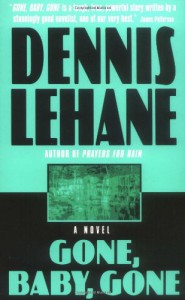 When a little girl goes missing and her mother's brother and sister-in-law hire them to find her, Patrick and Angela reluctantly accept. Their investigation drags them through a labyrinth of lies, one they will not emerge from unscathed...

Sweet zombie Jesus this is some good shit! I think Lehane might be the newest member of my crime fiction Holy Trinity with Lawrence Block and Richard Stark. Here's how it all went down.

After the events of [b:Sacred|425124|Sacred (Kenzie & Gennaro #3)|Dennis Lehane|http://d.gr-assets.com/books/1348510237s/425124.jpg|1352373], the previous book in the series, Patrick and Angela have more or less shacked up and have started bringing in big money. When Amanda McCready's family hires them, they take the case for the good of the child. I thought I had an idea where the case would go but it turned out I was way off. Gone, Baby, Gone was like walking down the sidewalk to get the mail and somehow ending up in Paraguay.

Gone, Baby, Gone is the most powerful Lehane book I've read yet. I thought I was desensitized to crimes against children from reading the Andrew Vachss Burke books but I was wrong. Like Mrs. Kemper's husband and I were discussing while I was reading, Angela and Patrick are much better people than Burke so the pieces of excrement they go up against while looking for a missing child seem that much more vile.

Lehane's strength is in his characters and he writes them very well. Patrick and Angela are the same people I've grown to know and love over the past few books. I felt like they dragged me to hell with them over the course of the investigation. Broussard and Poole drove the story forward and were likeable guys. I alternated feeling contempt and pity for Amanda's mother, Helene. Even Cheese was a well-realized character. Once things went pear-shaped, I couldn't believe Lehane had pulled the wool over my eyes so thoroughly, only to yank the rug out from under me so hard that I banged my head on the radiator.

I really can't say much more without giving away too much of the plot. Lehane made a believer out of me on this one. Five easy stars.
Tweet