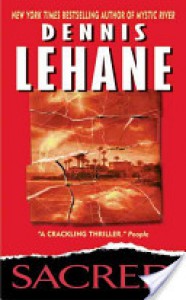 When Patrick Kenzie and Angela Gennaro are strong-armed and then enticed by a billionaire to find his missing daughter, dead or alive, they have no idea of the web of lies they are about to be entangled in, a web that has already made Patrick's mentor vanish without a trace...

One of the reasons I've gravitated toward detective fiction in my old age is that I'm far more likely to be taken by surprise. This book surprised me more than looking into my rear-view mirror on a midnight drive and finding a homicidal circus clown in my back seat.

Sacred starts off simply enough. A billionaire has Kenzie and Gennaro kidnapped, throws a heaping helping of cash at them, and sends them looking for his missing daughter. The trail leads to a grief counseling center, a cult, and eventually to Florida. Complicating things are the fact that Patrick's mentor was the last guy to look for Desiree Stone and has seemingly dropped off the face of the earth.

Like a lot of good authors, Lehane had me by the nose a few times. I found myself second-guessing myself every time I was close to figuring something out. The true villain of the piece wound up being pretty memorable.

A hallmark of a good detective series is letting the characters evolve. Patrick and Angie moved forward quite a bit in this book, both as individuals and as a couple. Jay Becker and his relationship with Patrick fleshed out Patrick's character a bit more. Lehane has already moved them far beyond what they were in the first book and I still have three books to go. I have to say I missed the old supporting cast of Oscar, Devin, and Bubba. Poor Bubba, winding up in the clink.

The writing was good but it felt a little lighter than maybe it should have. Still, I enjoyed the hell out of it and couldn't wait for everyone involved to get what was coming to them. I don't think it was as good as Darkness, Take My Hand but it was as good as A Drink Before the War.
Tweet