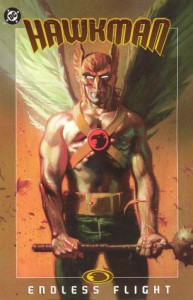 I have to admit that back in the day, I thought Hawkman (and all winged superheroes, for that matter) was the lamest thing around. It looks like I'll have to re-evaluate my opinion.

The writing is what drew me to this one. Geoff Johns AND James Robinson? How can I lose? Well, I couldn't. Here's what went down.

In the first story, Hawkman and Hawkgirl, constantly reincarnating lovers, are in the middle of a spat. Hawkgirl doesn't remember her previous incarnations the way Hawkman does and finds him creepy. Not to mention that he's a decade older than her. While searching for Hawkgirl's parents's murderer, they get caught up in a plot by an evil museum curator to swipe the Eye of Shiva. Mayhem ensues.

Instead of being lame, Johns and Robinson make Hawkman seem like a flying hybrid of Wolverine and Conan the Barbarian. The best parts of the book, however, are Hawkman's rocky relationship with Hawkgirl and his ever-present bickering with Green Arrow. Classic stuff.
Tweet