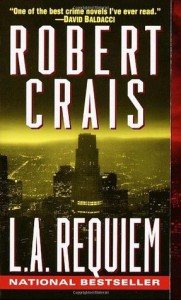 A woman Joe Pike used to be involved with is murdered and her father hires Elvis Cole and Joe Pike the find the killer. Things take a dark turn when it turns out the woman was murdered by a serial killer and that serial killer appears to be... Joe Pike?

As I've mentioned in pretty much ever review I've done for an Elvis Cole book so far, I thought he was a Spenser ripoff for the first book or two. This one leaves my initial impression in the dust like a drag racer trying to set a world land speed record on the salt flats. For me, this was the pinnacle of the series so far.

It started off ordinary enough but soon tore the doors off. The mysterious Joe Pike's past was explored, revealing much without killing all the mystery. Elvis's relationship with Lucy is strained near the breaking point so soon after she turned her life upside down to be with Elvis in LA. Elvis is forced to make some difficult decisions on his friend's behalf. Great stuff.

The new supporting characters were interesting. Krantz, with his ties to Joe Pike's past, made him one of the most interesting, even though he's a huge tool. I also really dug Samantha Dolan.

Crais had me going a couple times on this one. I had no idea who the killer was until he was revealed and even though I knew logically the killer wasn't Pike, I questioned myself a few times. For the first time in the series, I found Elvis and Lucy's relationship believable, maybe because it was coming apart. Joe and Elvis's relationship is still far more believable, as was Elvis' despair in the last thirty or so pages of the book, wondering if Pike was alive and if Lucy was still his.

That's about all I can say without revealing too much. L.A. Requiem is the best book yet in the Elvis Cole series. If you like the series up to this point, you'll love this one.
Tweet