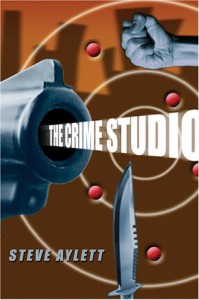 The Crime Studio is a collection of absurd and hilarious crime stories set in the city of Beerlight.

How does one go about reviewing a collection of short stories, most of which are four pages long or less? Should I talk about Brute Parker, the owner of an all night gun shop? Or Billy Panacea, ace burglar? Or Tony Endless, the pet thief? Or the mayor, Charlie Hiatus? Or the rotund police chief, Henry Blince? Or sleazy lawyer, Harpoon Spector? Eh, I'll just compare it to P.G. Wodehouse and be on my way.

The Crime Studio is a riotous collection of crime tales. If P.G. Wodehouse wrote about hardened criminals in a cesspool like Beerlight instead of the idle rich, this would be the book he would write. It's full of hilarious puns, sarcasm, and absurd situations. The language is by far the star of the show. Here are just a few of my favorite quotes:

When Billy came by the next morning to dispose of the head he was as happy as a dog in a sidecar.

"But I'm innocent you nasty man!" shouted Mrs. Devlin.
"Where? On candy planet?"

The first person to call her Sally the Gat was shot at such close range the cops drew a chalk body-outline on the ceiling.

There are plenty more hilarious bits where that came from. The Crime Studio should appeal to crime fans, Wodehouse fans, and bizarro fans alike. If you're in the mood for something hilarious, you can't go wrong with The Crime Studio.
Tweet