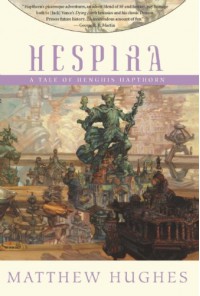 While acting as a middleman on a ransom case, Henghis Hapthorn runs into an amnesiac woman calling herself Hespira. Hapthorn's attempts to restore her memory take them all over the Spray. Meanwhile, the ransomer and the ransomee both have Hapthorn in their sights. Can Hapthorn restore Hespira's memory before he becomes just a memory himself?

As always, Hughes' love for Jack Vance takes center stage. The Age of Magic draws ever nearer and Henghis Hapthorn ponders his place in the impending Age. Oh, and he attempts to solve the mystery of Hespira's memory loss while having a lot of humorous lines.

Osk Rievor continues his development as a character independent of Henghis. I was pleased that the death of Tabanooch in the previous novel wasn't swept under the rug and I was also delighted to see another Grinnet show up.

You wouldn't think a mystery set in a Jack Vance-like setting would be as complex as the ones Hughes puts forth but this one takes the taco. How many mysteries have you read where the origin of an expensive dessert is an integral clue? The setting is nearly a character in itself, what with the multiple worlds, odd cultures, and the whimsies.

Any complaints? Not really. It was quite an enjoyable tale. 3.5 out of 5.
Tweet