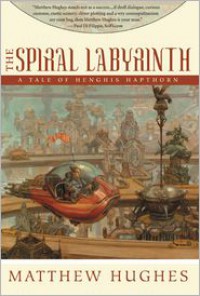 A case involving missing persons sees Henghis Hapthorn flung centuries into the future, where magic rules instead of reason and the five most powerful magicians of the age are looking for him. Can Henghis survive long enough to return to his own time?

The Henghis Hapthorn books feel like they're written with my tastes in mind. While clearly influence by Jack Vance's Dying Earth and space operas, they are essentially mysteries with a lot of Wodehousian language both in the dialogue and the writing itself. Hapthorn could easily be a member of the Drones Club.

Like the last book, the plot is pretty circuitous. Without giving too much away, how many other books feature a ship's AI that is obsessed with its owner, a super-intelligent colony of fungus, time travel, and a detective that has a second intelligence in his skull that happens to be a wizard?

The relationship between Osk Rievor, Hapthorn, and the Integrator continues to develop. The wizards of the future weren't as developed as I'd like but were straight out of Jack Vance. Smiling Bol in particular could easily have been a Dying Earth character. Something else I like is that Hughes uses the magic system Vance developed in Dying Earth that was later swiped for Dungeons and Dragons and various other things but puts his own spin on it. One of my favorite minor details of the story was that when Henghis traveled to the magic dominated future, his laser pistol was transformed into an intelligent magic sword.

One thing I have to mention is that Matthew Hughes isn't afraid to shake up Henghis Hapthorn's world, unlike a lot of other series writers. While I don't want to spoil things, the status quo is definitely not maintained and the ending is a little sad.

As always, Henghis Hapthorn should appeal to fans of Jack Vance, P.G. Wodehouse, and fans of odd mysteries. If you like all three of those things, you'll love this.
Tweet