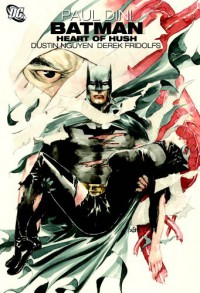 Hush returns and begins striking at Batman however he can. But when he attacks Catwoman and removes the heart from her chest, has he gone too far?

The Heart of Hush further fleshes out the childhood relationship between Bruce Wayne and Tommy Elliot, aka Hush, as well as that between Batman and Catwoman. It also cements Hush's place in Batman's Rogues Gallery along with legends like The Joker, the Penguin, and the Riddler.

Much like in his initial appearance, the big draw with Hush is that he knows Bruce Wayne well enough to strike him close to home, where it would hurt the most. In this case, it's Catwoman, who is used to show that Batman is still just a man. Hush continues to pal around with Bat-villains like Scarecrow and Mr. Freeze in order to achieve his goals. One thing I really liked in this volume was the Scarecrow juicing up a kidnapped, bat-fearing kid with Venom and unleashing him on Batman.

At the end of the day, however, it's not as remarkable as Hush or The Black Mirror, other recent Batman favorites of mine. Three stars, edging toward four.
Tweet