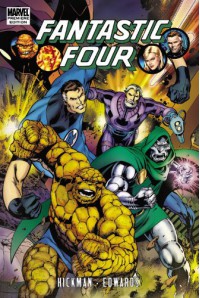 Reed Richards assembles promising young minds and forms the Future Foundation. The Human Torch takes Franklin and Leech shopping. The various versions of Nathaniel Richards, Reed's father, are hunting one another through the time stream until only one remains...

Hickman's guiding of Marvel's First Family continues. This time, he plays with B-list Fantastic Four foils like Arcade and Impossible Man. The formation of the Future Foundation sows the seeds for the Future Foundation's own title down the road, as well as giving The Thing something to look forward to every year.

By far, my favorite storyline in the collection was Nathaniel Richards snatching college-agedReed, Ben Grimm, and Victor Von Doom for a jaunt through time to combat another version of himself. Maybe it's because I've been watching a lot of Doctor Who lately but I really dug this story.

Still, it wasn't all peaches and gravy. Dale Eaglesham is gone, replaced by the not-quite-as-good Neil Edwards. Just as with the previous two volumes, it feels a lot more like setup than standalone tales. While I know Hickman's got something huge brewing, I don't know if I have the patience to stick around long enough to see it.

All that being said, I love the sheer amount of ideas Hickman is throwing at me. Even if the pace isn't as fast as I prefer, the man knows the Fantastic Four. 3 stars.
Tweet