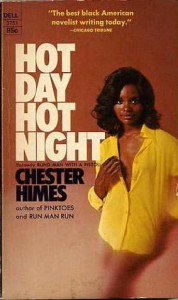 When a pantsless man with his throat cut dies at the feet of Coffin Ed and Grave Digger Jones, it's up to the toughest detectives in Harlem to find out who killed him. But can they solve the murder and figure out who's causing the riots that threaten to destroy Harlem?

Hot Day, Hot Night, aka Blind Man with a Pistol, is more than a pulp detective story. Like Himes's other books featuring Coffin Ed and Grave Digger Jones, it's a commentary about racism and racial equality. You can definitely tell by reading it that Himes wasn't planning on writing another Harlem Detective book. This one is bleak, chaotic, and even the baddest detectives in Harlem seem to be getting tired.

Chaotic would be the best way to describe the narrative. There are riots, murders, and all kinds of crazy shit. Coffin Ed and Grave Digger were just as in the dark as I was for most of it. The ending pretty much sums up the point Himes was trying to get across in the whole book: violence doesn't make sense.

It's a shame Chester Himes isn't very well known. He was definitely ahead of his time.
Tweet