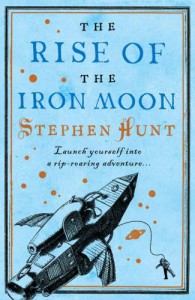 Purity Drake escapes the Royal Breeding House with a strange escaped slave. Molly Templar receives a strange message from the Hexmachina just before Earth is invaded! Can Purity Drake, last queen of Jackals, stop the invaders from the Iron Moon? Can Molly Templar, Commodore Black, Coppertracks, and a motley crew reach Kaliban to cut off the invasion at its source after being shot out of a giant cannon with riding an intelligent spacecraft?

Stephen Hunt does it again. When I picked up The Court of the Air, I never thought I was also picking up a new favorite author. Hunt once again shows his love for proto-sf in this yarn. The Rise of the Iron Moon is part War of the Worlds, part First Men on the Moon, a little of John Carter of Mars, with a dash of King Arthur thrown in. The invaders, the slats and their overseers, are disgusting and appropriately fearsome. You know things are going to be bad when The Court of the Air gets their collective asses handed to them.

It was good to see all the old favorites in action again, both from Kingdom Beyond the Waves and The Court of the Air. Molly, Oliver, and of course Old Blackie. Purity Drake was a bit of a cliche but you can't fault Hunt too much for that, not when the story is a page-turner brimming with ideas. The story takes a few unexpected turns, especially when everything goes horribly pear-shaped about 2/3rds of the way through.

This one is brimming with interesting ideas. Steampunk space travel, space elevators, bioengineered servants, a time singularity, all wrapped in a grand adventure straight out of H.G. Welles or Jules Verne.

There's so many good things I want to share about this book. The plot is top notch, revelations about the world of Jackals are well done, and the usual steampunkery is in fine form. Highly recommended but you would be best served to read the previous two volumes first.

Later: Looking back, I think the series hit its apex with The Kingdom Beyond the Waves. This book was almost as good as Kingdom but I didn't think Secrets of the Fire Sea or Jack Cloudie quite measured up. I'm not sure I'm going to read the sixth book at this point.
Tweet