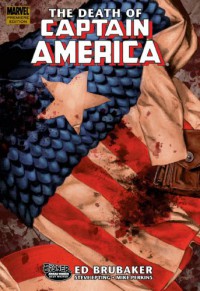 In the aftermath of the Civil War, Captain America is gunned down on the courthouse steps minutes before he was going to be arraigned. Now Bucky, the Winter Soldier, is gunning for Tony Stark and his first objective is claiming Captain America's shield...

First off, I went on a hiatus from buying Marvel Comics around the time Civil War hit because it wreaked of hype and things that would be undone at the first opportunity, like Spider-Man revealing his identity and Captain America being killed. Looks like death was a better career move for Captain America than revealing his identity was for the friendly neighborhood webslinger.

Captain America's death sets off a dramatic chain of events, thrusting Bucky, Falcon, Agent 13, and the Black Widow into the limelight. Cap's comrade's reactions to his death were very well done, especially Tony Stark's. If I wasn't a lifelong comic fan and knew Steve would be back in the saddle before too long, I might have wept along with them. With the Red Skull marshalling his forces, Bucky and company are going to have their hands full.

I have to hand it to Ed Brubaker. He does a great job of making Bucky seem like a worthy successor to the mantle, as well as making the Red Skull seem like a viable threat even though he's been defeated hundreds of times over the years. I'm eagerly awaiting the rest of Bucky's metamorphosis into the new Captain America. Let's see if Bru has the stones to make him a worthy lead character, unlike Grant Morrison did with Dick Grayson as Batman.
Tweet