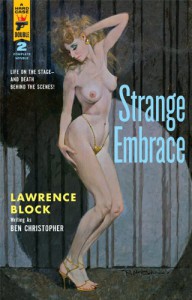 69 Barrow Street: Artist Ralph Lambert lives at 69 Barrow Street with a woman he both loves and hates. But what happens when they both get infatuated with the girl who just moved into their building...

Here we are, the first book in this Ace Double style Hard Case. Much like Hellcats and Honeygirls, these are books from Lawrence Block's early years writing smut, so if you're expecting the awesomeness of the marvelous Matthew Scudder series, you'll be disappointed.

On the other hand, if you like a bit of sleaze, you'll be entertained.

69 Barrow Street is the story of three people who live in the same apartment building in The Village. Ralph Lambert is an unemployed artist. Stella James is the buxom blond living off her inheritance and abusing Ralph as she sees fit in their twisted relationship. The applecart of their domestic "bliss" is upset when a lesbian named Susan Rivers moves into the building and Ralph decides to paint her.

Parts of the story are hilariously dated, like the talk of homosexual neurosis and early sixties slang. The tension builds as Ralph starts having feelings for Susan and Stella starts a bizarre relationship with another woman to cope.

There's a fair bit of smut as well, though it's fairly tame by today's standards. Still, it gets the job done. The relationship between Ralph and Susan is pretty well done, especially considering this was a smut paperback back in the day. The ending was good, heartwarming for one party and extremely twisted for the other. This story is a strong three, part Fatal Attraction and part Chasing Amy, and the ending makes it Hard Case worthy.

Strange Embrace:
Producer Johnny Lane's leading lady winds up dead, her throat slashed from ear to ear with a straight razor. Soon, the rest of the cast is getting threatening phone calls and Johnny is beaten up in an alley by thugs. Can he figure out who's behind the murder before his entire cast winds up dead?

Okay, if I had any doubts about this collection and its place in the Hard Case line, they went out the window with Strange Embrace. This one was a Hard Case from start to finish.

Even though he's a producer of plays, Johnny Lane makes a convincing and plausible detective lead. The cast, such as it is, are fairly well developed, especially since this was originally a lesbian smut paperback. I had an idea who the killer was but like he does to me over and over again, old Lawrence had me doubting myself on a couple occasions.

Like the first story, some things seemed hilariously dated but Block's writing improved quite a bit in between these two books.

Since I haven't already mentioned it, I'd like to say that while I normally don't care for Robert McGinnis's Hard Case covers, the two on this one were both top notch, although they didn't have much to do with the tales within. Be careful though, you probably shouldn't read these in public. One of the covers has nipples on display!

Four out of five stars based on pure entertainment value. If you're a fan of Lawrence Block, nab this now before you have to pay the jacked up prices Subterranean books normally command once they go out of print!