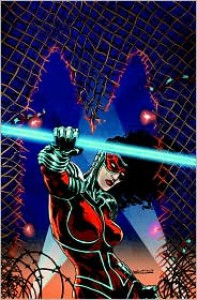 Manhunter defies Bones and heads south of the border to investigate a mysterious pharmaceutical company, meeting Blue Beetle and the Suicide Squad in the process. But has she bitten off more than she can chew?

Okay, this is the end of the Marc Andreyko Manhunter series. It's a shame too since it reads like it was just getting started.

First off, I just didn't enjoy this one as much. Kate left behind most of the supporting cast I've grown to know and love when she went down to Mexico. Granted, Blue Beetle, the Birds of Prey, and the Suicide Squad give Kate many opportunities to showcase her personality but it's just not the same.

The subplots involving Cammie, Dylan, and Mark Shaw were all okay but I would have liked to have seen how things turned out. Luckily, there's a Manhunter volume 6 collection the 8 page Manhunter backup stories published after the series ended.

The two-part Whatever Happened to the Manhunter story in the back of the book was actually more enjoyable than the main story for me. Ramsey gay? Kate shacking up with a man fifteen years younger than her? Obsidian mentoring a young group of legacy super heroes? Great stuff!