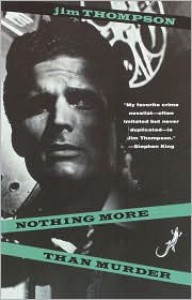 John Wilmot, part-owner of a troubled theater, and his estranged wife hatch a scheme to fake her death for the insurance money. The plan seems to go off without a hitch, but pressure mounts as the wolves come after John from every angle...

This sojourny into Jim Thompson's cheerful world is much the same as some of the others. A man hatches a plan and then comes apart as the pressure builds. John, his wife Elizabeth, and his pseudo-mistress Carol fake Elizabeth's death, John and Carol having rock solid alibis. Or so it seemed at the time. Most of the rest of the cast are scumbags of varying degrees.

Thompson mines the seedy underbelly of the movie theater industry for a rich vein of noir gold in this one. As the wheels come off the plan, you feel for Wilmot as he makes misstep after misstep and can't do anything to stop it. The final twist at the end is what bumped this up to four star territory for me.

The writing is stark and powerful, just what you expect from Jim Thompson. I liked that Thompson himself makes a cameo appearance in this story. As usual, Thompson has some great lines, like What smells good in the store may stink in the stewpot.

I'd rate this one slightly lower than Hell of a Woman but higher than a lot of Jim Thompson's other books. I'd call it a low 4 or a 3+.
Tweet