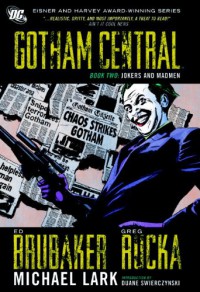 It's Christmas in Gotham and the Joker is picking off victims one at a time with a sniper rifle. The girl whose job it is to turn on the Bat signal has a crush on Batman. Two women are poisoned. A cold case involving the murder of an entire high school baseball team draws the attention of the GCPD AND ex-cop Harvey F'n Bullock! All par for the course down at Gotham Central...

So, yeah. Gotham Central had to be the best written comic book produced during it's entire run. I didn't think it would be possible for Brubaker and Rucka to top the first volume but they did, and Michael Lark pulled it all together with his art, which is understated but perfect for the tone of the series.

The individual stories were great. I love that Bru-Rucka doesn't give us nerfed versions of the villains just because they're going up against ordinary cops, not Batman. Speaking of the Bat, he's in this volume even less than the last one but I have to say I didn't miss him very much.

That's about all I have to say. Crime stories + Gotham City = Pure Comic Book Gold. Go out and get the Gotham Central omnibuses right now!
Tweet