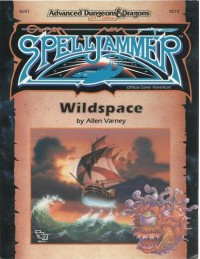 Nerd Alert!
Back in the early to mid-nineties, Dungeons and Dragons was a favorite pastime of mine. Hundreds of hours were spent in imaginary worlds, killing monsters and stealing their gear. A few summers ago, I was feeling nostalgic and picked up a few adventures for some light reading. Wildspace was the one that caught my interest the most.

Spelljammer, an AD&D 2e setting in fantasy space, never really caught on despite having an intriguing premise. Wizards flying wooden ships through crystal shells and the phlogiston separating them? Sounds like a license to print money to me. I didn't even have to mention the Giant Space Hamsters.

Wildspace is one of those do or die adventures where if the PCs fail, their world will probably be destroyed. The setting of Wildspace is a massive hollowed out asteroid called The Hive. It's basically a dungeon of mammoth size with rooms miles across, a dungeon big enough to fly a spelljamming ship inside with no problems. Inside the dungeon is a beholder super weapon, the Ravager, a device capable of massive destruction with the power of thousands of beholders.

While I've never run or played this adventure, it looks fairly easy to follow. The maps are detailed and the plot is actually not too bad, a rarity in published adventures from that era. There is a little railroading via NPCs using charm spells but not enough to be a deal breaker. The rewards for completing the adventure won't unbalance things if it's played in an ongoing campaign. In fact, they're a little light if the heroes don't decide to use the Hive for their new base.

That's really all I have to say. Of the Spelljammer adventures I've read or played so far, this one is it.
Tweet