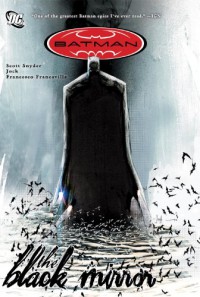 Gotham's Batman, Dick Grayson, takes on the Dealer, a man selling the weapons of supervillains stolen from the GCPD evidence room, gun runners harassing a mob bosses daughter, and possibly the greatest threat of all, Commissioner Gordon's son...

You know, when DC put Dick Grayson in the Bat-costume, we all knew it wouldn't last and while I liked the issues of Batman & Robin I read, I didn't find anything earth-shattering and thought Dick's tenure as the Caped Crusader would be pretty forgettable. I WAS WRONG!

There are epic tales of the Bruce Wayne Batman that everyone mentions: The Killing Joke, The Dark Knight, Year One, The Long Halloween, the list goes on and on. This is Dick Grayson's epic.

Scott Snyder and Jock take the reader on a dark journey, following Dick Grayson as he tries to fill Bruce Wayne's shoes. While Grant Morrison made Batman fun again when he put Dick in the costume, Scott Snyder made me believe.

Batman goes up against The Dealer, Roadrunner, Tiger Shark, and even the Joker, but the most chilling villain in the Black Mirror is James Gordon Jr, the Commissioner's son. I can't even think of another comic book villain that actually scared me but James was scary because he was so real, so plausible. And I had a batgasm when he finally got what was coming to him.

That's about all I can say without giving too much away. I know I clicked the spoilers box but I didn't spoil more than the dust jacket. If I could give this six stars, I would. Scott Snyder is the real deal and I'm going to continue buying everything of his I can find.
Tweet