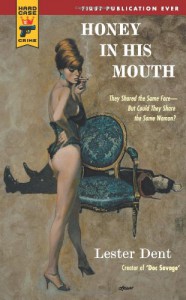 After a close call with an angry man he swindled, photographer and con man Walter Harsh is approached by people in the employ of the ruler of an unnamed South American country. It seems Walter bears an uncanny resemblance to El Presidente, which fits nicely into their schemes to get access to the sixty-five million dollars El Presidente is known to possess...

I'll be real honest with you. Lester Dent's writing in the Doc Savage tales never really floated my boat. Maybe it's because he was writing for a penny per word. That being said, I liked Honey in his Mouth a lot. The writing was lightyears ahead of what Dent did in the early Doc Savages.

The plot moved along at a fast pace. Walter's a scumbag but still likeable. The people plotting against El Presidente are a diverse crew, including El Presidente's psychotic castrado brother, Brother. The subplot involving Harsh trying to break into a safe at Brother's estate keeps the story moving while everyone's trying to determine El Presidente's whereabouts. The ending surprised me and pretty much everyone got what they had coming to them.

In short, Lester Dent proved me wrong. This is a worthy addition to any Hard Case Crime fan's collection.
Tweet