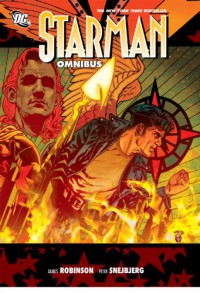 Jack Knight returns from his space voyage to find most of his friends missing, all clues pointing toward the Shade. A shadowy dome locks Opal City in perpetual darkness and Starman's rogues gallery is ready to destroy Opal. Can Jack stop them and save his friends?

First off, this is my third trip through the Starman saga and it's just as powerful as it was the first time. One of the comics contained within is the only comic that every jerked a tear out of me. As I say every time I talk about Starman, this isn't your average superhero comic. It's about the Starman legacy, stepping into your father's shoes and doing your best to fill them, and about giving your parents their respect. This volume is chock full of touching moments, between Jack and his father, the O'Dares, and others. It's really emotional considering superhero comics usually just feature guys in spandex punching each other.

Robinson dragged back nearly every villain and supporting cast member for this outing, even adding some new ones in the process. The O'Dares, Bobo Benetti, Sadie, Mikaal, the Black Pirate, the original Mist, the current Mist, they're all in, as well as Elongated Man and his wife, Adam Strange, Hamilton Drew, Black Condor, Phantom Lady, Superman, and most of the Justice Society. What can I say? The end of the Starman saga reads like James Robinson thought it might be his last hurrah as well and he pulled out all the stops.

There's not a hell of a lot I can say about the story except that most of the loose ends get tied up, even Jack's tryst with the Mist and the much heralded tale of the Starman of 1951. Characters die, others change irrevocably. When the dust settles, you know it's the end, and quite a satisfying end at that.

Before I wrap this up, I'll go into what this book contains that wasn't in the original trades. There are Times Past issues that didn't make the cut, as well as The Blackest Night issue of Starman published last year, which can easily be ignored.

I'd better wrap this up so I can read the afterword again before I shelf the Starman saga for now. For my money, Starman was THE superhero comic to read in the 1990's and the series of six omnibuses is the best way to enjoy it. I can't recommend the series enough.
Tweet